I’ll update this as the day progresses at PyCon 2010.

1743: Lightning talks. Some sophomoric obscene humor is on display in one of the talks.

1655: Scaling your Python Application on EC2. Reddit’s move to EC2. They run 16 Python applications per server, two per core. 256 virtual CPUs, 432 GB of RAM. Problems in cloud migration. EBS devices sometime slow down, sometimes a lot. Workaround was using software RAID to ameliorate the effects of a slow disk. Latency between virtualized hardware bit them.

They use four master databases, with each one having at least one read slave. They avoid reading from the master, if possible. They wrote their own database access layer, because “at the time there wasn’t a good database ORM layer.” PostgreSQL is used as a key/value store – it was faster than any key/value store they tried. (!) They love memcached: 5GB render cache, 15GB data cache, and 10GB precomputed queries cache.

Logged-out users always get cached content, so Akamai bears the load. These users are about 80% of total site traffic.

They also use C. Their whitespace filter is in C. They are switching to a memcache C library.

They didn’t use Django, because Django was “early alpha” then, support was hard to find, rendering was slow, and “the sandbox was hampering.” So they chose Pylons.

Moving to EC2 saved them 30% per month in ?total operational costs? ?server and technology costs? They pay $20K/month for hosting on EC2.

1600: Powerful Pythonic Patterns. http://www.aleax.it/pycon_ppp.pdf. 99% of the #pycon twitter traffic praised the greatness of this talk. I wasn’t impressed. Half of it was a needless exposition of particular words’ meaning. “Design” comes after “research” and before “implementation,” wow, holy Toledo, no kidding?

But, here’s one good slide from the talk: 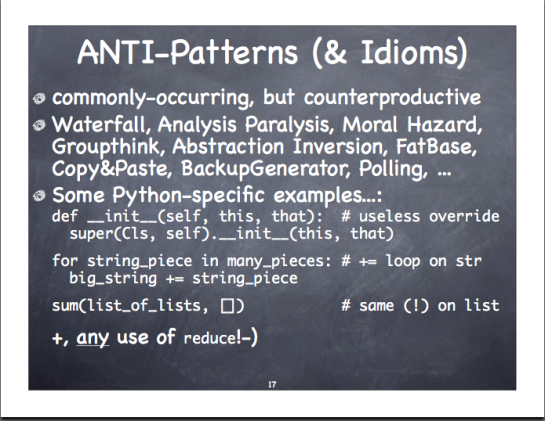 1402: Now going to forage for information in the exhibit hall, and hunt for business for Meta Consulting.

1105: The Mighty Dictionary. Not as interesting as I had expected.

1025: Lessons Learned on the Real-Time Web. Orbited, Twisted, JSON. StompMQ. Tornado. Redis. A survey of the technical pros and cons of four sites the speaker has designed and implemented.

0931: Guido says Python 2.7 will be the last release in the 2-series. The conference is using a Twitter projected on a screen to ask questions of Guido. It’s not working very well, because with a font sufficiently large for the audience to read the screen, the tweets scroll off the screen too quickly.

0720: Catching up on the state of the world, at the downstairs hall. The registration desk isn’t set up yet.