After I left Twitter, I decided to start paying for news.

So I subscribed to The New York Times, The Washington Post, and The Guardian. (And I’ve been subscribed to Talking Points Memo for about five years.)

I’m enjoying paying for journalism and being better informed. I read all three sources online or on my iPhone, and the apps work great.

And The Guardian’s subscription department has a sense of humor! 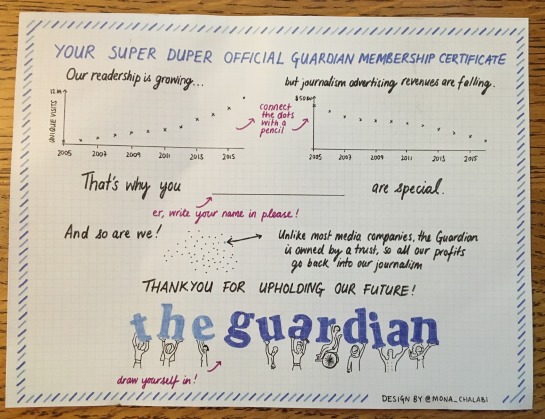 Since registering for PyCon 2017 back during the early bird registration, I’ve changed jobs and stopped using Twitter. Here’s my classy fix to the badge. 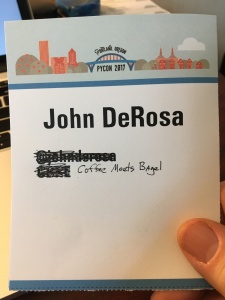 Helping my company migrate everything to Python 3. Righteous!

And we’ll update everything else, including Django, when we do it.

If only an updated Python Essential Reference was available… I’d buy it for every developer. I can’t hassle David anymore since I left Twitter. ‘Tis a shame. I could send him email and text messages, but it wouldn’t be the same.

I’ve been banned from a subreddit. This is a kind of merit badge. It’s a good thing.

I recently left Twitter. I’d had it up to here with the fake news and trolls. I enjoyed keeping in touch with friends and exchanging brief observations about our lives. But on balance I felt it wasn’t enriching, and instead was a source of negativity and anger.

After having been off Twitter for 10 days I can say this:

I’m happier without it. I’m more focused, less distracted, and can put more energy into more satisfying interactions with the world. END_OF_DOCUMENT_TOKEN_TO_BE_REPLACED

I’ve left Twitter. I can no longer tolerate their arbitrary rules that favor the powerful and the fraudulent.

If you use Emacs and Twitter, give TwitteringMode a try.  It won’t replace your favorite client, but you can easily follow a list without leaving Emacs and do most things (reply, RT, etc.) with it. No image posting, but it can optionally display avatars.

My work is going well. We released a substantial pre-alpha of our product, and the first reactions are positive. I can’t say more than that, except to say that we’re now in a slog to reach the next release, which, if all goes well, will be somewhere between an alpha and a beta. Time will tell.

END_OF_DOCUMENT_TOKEN_TO_BE_REPLACED

I had a revelation this morning: I learn about news events mostly from Twitter. This seems obvious, and almost natural, in hindsight. But even three months ago I didn’t expect this.

END_OF_DOCUMENT_TOKEN_TO_BE_REPLACED

That’s my term. I just invented it.

Hey baby. You got girlfriend?

I was a CB radio user in the 80’s, when I lived in Massachusetts. I got into Single Side Band transmission, joined a local CB radio club, and briefly planned to buy a high-power (cough illegal cough) transmitter. I eventually lost interest, because I discovered that most CB conversations were about … CB radio. People bought CB radios to talk to other CB radio owners about CB, and this was a lot of navel-lint gazing.