My friend Kirk has run his dev team in a mostly Agile system. Code sprints, agreeing on tickets for the sprint, declaring victory at the end of the sprint, etc.

I need you to commit to achieve certain goals by various dates over the next year. Once you agree to them, you need to commit to delivering them on time.

How is this situation silly? Let me count the ways…

END_OF_DOCUMENT_TOKEN_TO_BE_REPLACED

Kirk lobbied his boss for a big raise for Amy. He thought about this the right way:

I’ve researched the current market rates for developers of Amy’s level and abilities. She’s very good, she’s worked hard for us, and I expect great things from her this year. The plan calls for raising her salary to $X, But I suggest we raise her salary to $(X + n) because that’s the going salary for someone like her in this area.

Kirk’s boss thought about it the wrong way:

A raise to $(X + n/2) would be better. It’ll be a large increase over her current salary.

END_OF_DOCUMENT_TOKEN_TO_BE_REPLACED

The Department of Cluelessness

END_OF_DOCUMENT_TOKEN_TO_BE_REPLACED 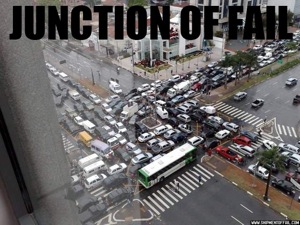 The city calls this ode to concrete an “urban oasis.” I am not kidding — its official name is, “Counterbalance Park: An Urban Oasis.”

I knew it’d be terrible when I heard its name. Because when an official body extravagantly claims something, you can safely assume their claim isn’t true. If you think that’s too cynical, I submit the following evidence:

I rest my case.

END_OF_DOCUMENT_TOKEN_TO_BE_REPLACED

Dave Gouldin is one of the bright minds at Pegasus News, and a performer in the up-and-coming alternative/indie band Watching Cars.

AT&T Mobile is selling refurbished iPhones, and Dave has run into a buzz-saw of AT&T Mobile incompetence whilst trying to buy one.